A Conewhich is a hollow cone-shaped bread that can be filled with salad, barbecue, meat, dessert fillings and more.

Suburban Milano Bakery one of few licensed to bake Conewiches 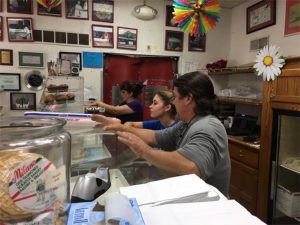 Yvette Fontana, from left, Victoria DeBenedetti and Darin DeBenedetti discuss displays in Milano Bakery’s retail store on South Chicago Street in Joliet. Victoria is among several members of the fourth generation of DeBenedettis to work for the family business. (Ted Slowik/Daily Southtown)

Conewich bread cones are a new product being served at festivals, mall food courts, sports arenas and other places across the country.

The cones can be served with a variety of fillings, from grilled chicken, vegetables, macaroni and cheese or barbecued pork to fruit, sweets and other treats.

Las Vegas-based Conewich created the concept, and Joliet-based Milano Bakery is one of just a few bakeries nationwide licensed to supply the products. The spiral-shaped bread cones can be baked in white, wheat, sesame, garlic, jalapeno cheddar or cinnamon-raisin flavors.

“It can hold liquid things, such as hot dogs with chili, Philly cheese sandwich fillings, pizza type fillings, barbecued beef. You could do apple slices and ice cream in a cinnamon-raisin Conewich. It’s a good breakfast item. You can add eggs, rice and beans,” creator Ward Goldstein said on the Conewich website.

Milano is listed on Conewich’s website as an approved bakery to make the bread cones in the United States.

Read the full article at ChicagoTribune.com